Disclaimer: All information is kept secure and will not be shared or sold to any third party.

White tails are a glossless black, with long bodies and an unmistakable white spot on their abdomen. Adults legs will come to be reddish.

They are found in all of the South of Australia. They are often found in buildings, especially in homes. They live under rocks naturally however, timber that has fallen to the ground, gardens, bark and bushland.

When you are bitten you will feel pain in the bite, some redness and swelling can be expected. This may last a few days at most. Sometimes the symptoms will be worse, but this is rare.

White tails are not web-building. They will forage for prey, rather than try to catch it.

The St Andrews Cross Spider is, like its name, known for bright ribbons of colourful silk in its web. This isn't often found in the orb of the web. They also have a cross, made of silver, yellow, red and black. When the spider is sitting, it pairs its legs.

The males are brown and cream, much tinier than the females of the species. The bite is quite innocuous but can cause some skin reactions. Those with strong reaction may be undergoing an allergic reaction.

The badge huntsman is long-legged with a big body. They are a greyish brown. They sometimes have a kind of 'badge' of colour under the fore legs. They have a low, flat body so they can fit into crevices, under bark, or rocks. They have a kind of crab-walk, owing to their legs which can bend to be vertical to the body.

A badge huntsman's bite will cause pain, swelling, sweating, nausea and vomiting. You should seek medical attention.  They are not a web building spider.

A dark black colour, though the abandonment is a charcoal grey. There is usually a pattern of markings on their fur, which appears velvety.

It is unusual for this spider to bite as they are quite shy, non-aggressive spiders. If bitten, however, victims may experience similar symptoms to a huntsman.

Their web is a fine lace-like substance. It often forms two funnels.

Can often be found indoors - in furniture or cupboards. More common in sheds, pot plants, as well as refuse.

The bite will not kill you, but it can cause nausea and headache. They form a stick web.

Red backs are on the most dangerous species of spider in Australia, behind only the Sydney Funnel Web. The body is a deep, glossy black. They have long slender legs. They are only very small, but deadly, with bodies the size of a five-cent piece. The red back spider is so named because of a red stripe or a series of red dots on the abdomen.

They will often be found in litter, in old paint tins and cans, under verandas, under seats, rocks and outdoor toilets.

The bite is extremely venomous and can make someone sick, but also convulse. Seek emergency medical attention immediately if bitten. The bites can be deadly. 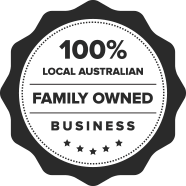